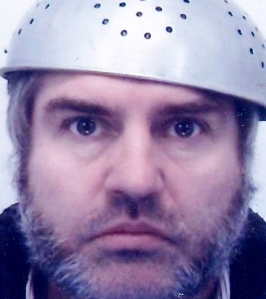 Learning to drive is something everybody deserves an opportunity to take part in. It’s a universal skill of aspiration and Tudor Driving School will never condemn or scrutinise anybody who comes our way regardless of race, culture or orientation. With that said, is it fair that the DVLA have rejected this man’s driving license application on the basis of Mr Ian Harris wearing a colander (yes, a pasta strainer) on his head?

We’ve all met some odd people in our time, most of them really quite charming, but never have we driven a man around with a colander on his head. Would we object to teaching him? No – but we’re not issuing official photographic documentation for his driving license, so it’s somewhat understandable why they have refused to authorise his photograph. The thing is, Mr Harris says his colander is religious attire for his belief in the Church of the Flying Spaghetti Monster. He’s a ‘Pastafarian’, in fact it sounds like quite a fun church which is based around free speech and offers a light hearted alternative for atheists. It has a long history and has made the news before but is it a true religious piece of attire?

It’s safe to say Mr Ian Harris isn’t too happy about his rejection and has taken steps to prove his devotion to the Flying Spaghetti Monster. Thing is, it’s clear he’s doing it in goodwill and trying to prove a satirical point about conventional religion:- “I have a spiritual connection with the Flying Spaghetti Monster, until they have brain probes how are they going to say I don’t.”

DVLA claim religious headwear is only allowed for major religions and the photograph must be clear and a current likeness to allow police confusion free identification. That’s all very fair but the push for ‘major’ religions only seems to rub some people the wrong way. It would be rather funny if he does indeed get to wear his colander, weirder things have certainly occurred and in this age of cynicism it would be a kind gesture.